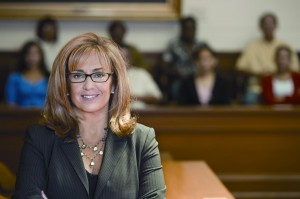 As a prosecutor who has spent over a decade fighting human trafficking, I’ve seen the terrible human toll of sex trafficking in California. Every day, women and children are forced to sell their bodies, on the streets and online, for the financial gain of human traffickers.

I have helped to create and lead the first of its kind unit in the nation dedicated to recovering sexually exploited children and prosecuting those who profit from selling them.  Since 2006, this unit has prosecuted over 200 sex traffickers and supported the rescue of hundreds of children, some as young as 11 years old.

While our efforts have made a difference, we could’ve saved and prevented many more. California’s current laws are simply inadequate to confront the growing problem of human trafficking within our state.  A recent national study by a victims’ rights group gave California an “F” grade for its weak laws dealing with child sex trafficking.  Prop 35 eliminates the shortcomings of our existing law that is riddled with gaping loopholes through which children literally fall into the hands of traffickers waiting to profit from them.

Drug dealers, gangs and organized crime are moving into sex trafficking because the current penalties present very low risk for them.  Grotesquely, they realize that there is no better investment than selling children these days because the profit is high and risk is low. And while children and girls are increasingly sold online, current laws against sexual exploitation have not been updated to face 21st century realities. As a 23-year veteran prosecutor and proud Californian, I know we can do better.

That’s why I teamed up with advocates for victims to write Prop 35.  The language of Prop 35 is carefully written to confront the growing problem of human trafficking in our state.  It uses federal law as a guideline and draws on the first-hand experience of prosecutors and those who work to help victims.  For too long, victims have been mistreated while traffickers escape punishment.  Prop 35 protects victims in so many ways and, for the first time, clearly recognizes sex trafficking victims as victims and not “prostitutes.”

After so many years of working to stop human trafficking and strengthen our laws against this crime, it is a dream come true to see a comprehensive measure like Prop 35 on the ballot. There’s no doubt that Prop 35, once passed, will save lives. That’s why the measure has widespread, bipartisan support from survivors, anti-trafficking advocates, women’s rights groups, child advocates, faith-based organizations to major law enforcement organizations, lawmakers, and prosecutors.

The changes embedded in Prop 35 will save lives and taxpayer resources. You may have some questions about Prop 35.  Here are some answers to the questions we hear most often so you can make an informed choice.

Isn’t human trafficking just an international issue?
Many think that human trafficking is a third world problem.  But from my vantage point in the trenches, I can tell you that it’s a universal crisis occurring in our own backyard.  Domestic trafficking is no less serious when international borders are not crossed.  The risk and harm to a child is the same whether she is trafficked from China or within California, where the FBI has identified San Francisco, Los Angeles, and San Diego as high intensity child sex trafficking areas. Prop 35 allows us to protect all children here in California.

What will Prop 35 cost?
The costs of Prop 35 are negligible.  The nonpartisan Legislative Analyst Office (LAO) has reported Prop 35 will have a “minor increase in state and local criminal justice costs from increased penalties” and there would be potential one-time local costs of up to a few million statewide for police training. On the other hand, Prop 35 will generate new funds through criminal fines to pay for victims’ services to help survivors recover and become vital members of our communities.

The benefit of rescuing and healing our children far exceeds the very small expense associated with Prop 35. Moreover, helping survivors turn their lives around will pay dividends for generations. When exploited girls and boys are assisted, the criminal justice system will see savings through vast reductions in future arrests and burdens on the courts.  Given how strong and clear Prop 35 is, I predict that we will also see a reduction in trafficking in our state. Trafficking will no longer be easy money and convicted traffickers will be required to forfeit their assets.

The savings are huge, and will spare children yet not enslaved.

Would Prop 35 criminalize consensual behavior?
Absolutely not. Human trafficking entails profiting from the sexual exploitation of a child (who cannot legally consent to sexual conduct) or the use of force, fraud and coercion to compel an adult into forced labor or commercial sex acts against his/her will.  Prop 35 is narrowly tailored and specifically states that there must be criminal intent to violate the law.  Prop 35 not only requires the showing that the trafficker causes a child “to engage in a commercial sex act”  but also “with the intent to effect or maintain a violation of Section,” and it lists 12 different existing criminal sections in our state law.

Human trafficking is a brutal and clearly delineated crime that involves and requires proof the criminal intent (called mens rea) to exploit another human being for profit. PROP 35 is not something that could ever be triggered by mistake.

Why not address this in the Legislature?
Every year for the past five years, along with many others, I’ve been in Sacramento trying to improve our state’s human trafficking law. For instance, I worked on a bill that would update our anti-trafficking law to the national standard by removing the need to prove force in child sex trafficking cases. This bill was introduced three times, and died three times. However, the exact language of this bill, which sailed through the Assembly without any opposition, is now contained in Prop 35.

While our legislators have made commendable incremental progress, our laws are still inadequate. Californians simply cannot afford to let another day go by without a comprehensive human trafficking law that protects victims and those at risk within our own state.

Does Prop 35 unfairly limit the ability of accused traffickers to defend themselves in court?
No. Prop 35 simply levels the playing field for victims who can currently be intimidated out of their rights.  The measure provides trafficked victims the same level of protection that rape victims currently receive under the Rape Shield Law.  Like the federal human trafficking law, Prop 35 removes the requirement to prove force in child sex trafficking cases. Prop 35 provides victims with evidentiary protection when testifying against their traffickers. Specifically, evidence that the victims engaged in a commercial sex act (such as prostitution) as a result of being a victim of human trafficking cannot be used to prosecute them. Victims will be able to face their exploiters in a court of law without fear of prosecution, and defendants will maintain the right to mount a full defense in court.

Final Thoughts
Prop 35 gives prosecutors, police and advocates the tools we need to fight this very important fight. Prop 35 is a comprehensive and effective response to an epidemic that plagues our state and must be stopped in order to protect our children from what is – no matter how you look at it – modern day slavery. When Prop 35 passes, we will have the clearest and best human trafficking law in the country. I predict that traffickers will flee as fast as possible from our state.  By voting yes on Proposition 35, you will have done your very best to protect our state’s most precious resource, our children.

Let’s send a clear message that California does not tolerate the sexual exploitation of women and children. Please Vote Yes on 35 this November.

About Sharmin Bock
Sharmin Bock is a 23-year veteran prosecutor in California and a nationally recognized leader on cutting edge criminal prosecutions including DNA cold cases and human exploitation and trafficking.  Sharmin was recognized as Woman of the Year by the California State Legislature and awarded the prestigious Fay Stender Award by the California Women Lawyers. Sharmin was a candidate for San Francisco District Attorney in 2011.